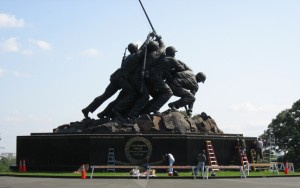 In September of 2008 during the SOG’s Gilding at the Smithsonian conference, members contributed their time to the Community Project of re-gilding the lettering and medallions on the base of the U.S. Marine Corps Iwo Jima Memorial. This monument is one of the most visited sites in the region and the National Park Service was thrilled with the contribution by the members of the Society of Gilders. Thanks to all that contributed their time and resources!