Watch this great video that tells all about the Museum, narrated by Liz Vincent of Pontiac

The front half of the museum houses exhibits on the methods and applications of gilding, with some hands-on demonstrations. The back half of the museum is a meticulous re-creation of the M. Swift and Sons gold beating room. There is a gift shop, and an exhibit of members’ work. (If you have gilding-related items for the gift shop, please contact us.) 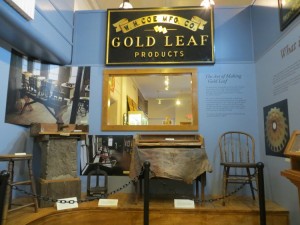 Museum exhibits include: “What is Gilding?,”  “How Gold is Made,” with photos and video from Giusto Manetti Battiloro – SpA (gold leaf manufacturer), a case of gold beating tools, antique signage, a section on “How To Gild” with various gilding tools, leaf and equipment, a visual demo of the steps involved in both mordant and water gilding, and then two walls of member works entitled “Where Do You See Gold Leaf?”.  The latter is an opportunity to show visitors the everyday places that they can see gold, from window lettering to fine art, to architectural items, frames, mirrors and everyday items. 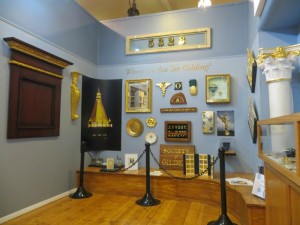 Pontiac, Illinois is a vibrant small city about an hour drive southwest of Chicago, located on the historic Rt. 66 highway.  When the recession hit, and most small towns were hoping for state and federal government intervention, the City decided that their fate was in their own hands and banked on tourism to keep their city vibrant.  As a result, the City is a model community for restoration and tourism development.  Pontiac boasts a variety of museums and attractions which, together with frequent regional events, draw visitors from around the world to this charming mid-western city.

The Society of Gilders became the proud owner of the Swift Collection in 2007.  M. Swift & Sons was a Hartford, Connecticut business whose specialty was gold beating and the manufacture of gold leaf products. When the business was started in 1877, Swift was beating gold by hand in order to produce leaf. In the early 20th century, machines began doing part of the process of making leaf. M. Allen Swift, a fifth generation gold beater and the last owner of the business, was one of the last people in this country to beat gold entirely by hand. When the business closed in 2005, Allen had the foresight to save the gold beating shop as it was used. He created a private museum where the shop was rebuilt exactly as it had been. 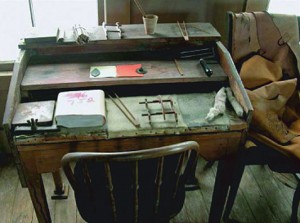 The Swift family donated the collection to the Society of Gilders in 2007.  The collection includes eight gold beating stations, gold packers desks, chairs and stools, mallets, cutches and packing materials, melting crucibles and other tools and equipment used on a daily basis from 1877 until approximately 1920.  The collection also includes signage, items from other companies that the Swift Company acquired over the years, documents, photographs, awards and even some trade show display items. 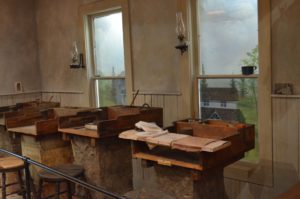 With much painstaking work, artists from the SOG, led by Annie LeMarie, re-created the aged interior of the factory, down to trompe l’oeil views out the windows that were the same seen by the original goldbeaters.

Installation was a group effort. Below, Smith Coleman works on a wall display. 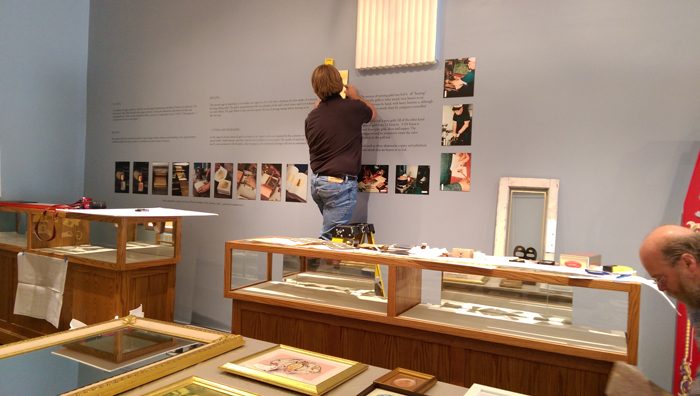 June 6, 2015: Below, left–Cutting the Ribbon;  right–President Naomi Lipsky presents Peter Miller and Annie Lemarie with special awards for their monumental work on the Museum 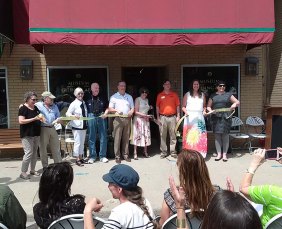 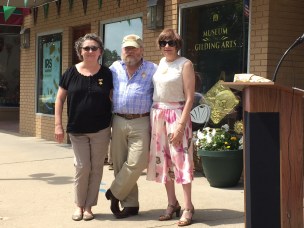 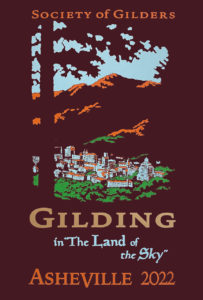